Mindfulness: More Important Than You Think

Depending on where you come from, the mindfulness craze may seem like nothing more than a craze. But research says its practitioners are onto something. Keep reading to discover a few ways in which mindfulness could improve your quality of life, for free.

Taking a Step Back

Mindfulness is the alternative needed by those who need to meditate but don’t want to. This works because rather than trying to dispel thought and think of nothing at all, those who pursue mindfulness can subdue anxiety and find their calm by directing their thought. They may choose to notice the soothing white noise coming from the vent, the depth with which they are breathing, or the feeling of their feet inside their socks inside their shoes. The reason behind why this works is that in doing so, they replace the part of them that is stuck in a worried mental loop and transport themselves to where and when they actually are, which is often far more pleasant. It also avoids the trap inherent in self-directives like “Don’t think about pink elephants.”

Habitual practice of mindfulness can promote a more conscious, healthful relationship with the body. In the modern world, it is frequently easy to escape even our most immediate concerns by distracting ourselves with a vast array of options for distraction, enabling physical problems to continue. Without mindfulness, it is possible to overeat while under-nourishing oneself, to medicate symptoms rather than causes, and to ignore the body’s protests. But this is dangerous, because the body only wants the best for you, and it is unfailingly honest. 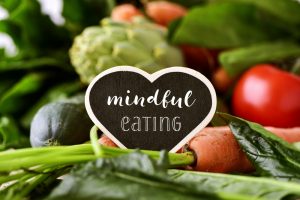 How common is it to eat snack foods while watching TV? Taking this one step further, how often do humans eat excessive quantities of snack foods while focused on the television? This phenomenon prompted a call for controlled portion sizes in snack foods, and 100 calorie snack packs were born. Consumers often complained, however, that these small portion sizes felt like nothing. This ignores the well-published concept that enjoyment of dessert foods diminishes at an exponential rate, from the moment they are initially tasted. Often, consumers are not satisfied with smaller quantities of food because they are not paying attention to the food they are eating. And science supplies that the longer they continue to eat these snack foods, the less pleasure they feel in doing so; in other words, the first cupcake always tastes better than the first. The body knows this fact, but the mind often ignores it.

If you are in the habit of sugary breakfasts, try closing your eyes as you eat, experiencing your food as if nothing exists, and then recording how you feel two and five hours later. Do the same with a balanced breakfast on another day, and record how you feel. The degree to which food affects not only mood but our very perceptions of reality is wild, and mindfully harnessing the body’s power to tell you what it does and doesn’t want is a vital step in any successful dieting plan.

Beyond physical health, the body can be incredibly informative with regard to emotional health. This is because all of the body’s reactions are genuine. Taking the time to notice the tension patterns in our everyday lives can prevent us from deceiving others, and from deceiving ourselves. People who are not living according to their own personal convictions or who ignore their emotions often feel more physically restricted than they would otherwise, due to this tension. Stopping for a minute and taking stock of the tension in the body will help remedy this, and may serve as a daily reminder to do what feels right, emotionally and physically. This moment of checking in may also guide you to move around periodically to keep the blood flowing throughout the day, which many Americans forget to do.

Japanese folklore tells of a mysterious creature called an Obariyon, a demon that loves nothing more than to latch onto travelers’ shoulders, refusing to let go and becoming heavier with every step. There is no way for the traveler to free himself from the creature’s grasp except to carry it all the way home and address it because what the Obariyon truly desires is to be acknowledged and taken care of. This is a perfect metaphor for mindfulness and emotional burdens. 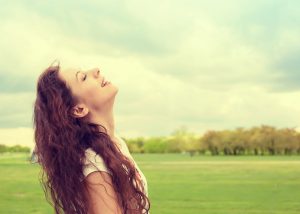 It can become difficult, especially with regard to societal expectations, to manage a wide spectrum of emotions in a fast-paced world. But when you acknowledge all of your feelings, taking the time to sit with them and hear their concerns, it becomes easier to let them go. And as the traveler who carries the Obariyon all the way home may find that the burden has transformed into a sack of gold, a frequent occurrence in folk tales, so may the emotionally burdened man find that sitting thoughtfully with his problems may reap great reward.

The creature is an analogy for how ignoring your problems only makes them heavier, and how sticking with, caring for, and understanding one’s personal burdens may mean greater prosperity. Continuing to carry personal devastations without bringing them to tea, or mindfully considering one’s honest feelings and the motivations behind them, leaves a traveler to constricted to function in a healthy, productive way.

In learning how to quiet the mind, individuals may find it becomes easier to do so when the head hits the pillow. Instead of chasing his mind in circles trying to make it stop, the mindfulness enthusiast is more likely to be able to turn it off simply. For some, prayer before bed may serve this same purpose, but mindfulness works as a belief-neutral activity. In any case, taking a moment to focus on the present moment, of the feeling of the mattress below your bones, the texture of the sheets against your legs, and the slow, even pace of your breath can help redirect your energy when it is time to sleep so more may be available in the morning.

The Many Warning Signs and Types of Depression

What is Phalloplasty Surgery & How Much Does it Cost?