Contents show
1 Men May Show Different Symptoms
2 Diagnostic Criteria For Major Depressive Disorder
2.1 #1 Combination Of 5 Symptoms
2.2 #2 Functioning Is Impaired
2.3 #3 Not Caused By Medication
2.4 #4 Not Schizo Or Psychotic
2.5 #5 Not Manic Or Hypomanic

You would think that a man as big, strong, and confident as Dwayne “The Rock” Johnson would be immune to depression. But no, “depression never discriminates”, the Rampage star tweeted on April 2, saying the key for men to overcome depression is to open up and talk about it. The Rock has been open about sharing his fight with depression on his social media accounts. He also shared through his Instagram account how his mother attempted suicide when he was just 15.

As open as Dwayne Johnson is about his battle with depression, not all men find it easy to talk about their mental health conditions. This is also one of the reasons why depression can sometimes be difficult to detect in men. This may also explain why men have lower recorded incidents of depression.

In fact, 2016 data from the National Institute of Mental Health showed that while 8.5% of American women experienced a depressive episode in the past year, only 4.8% of American men reported the same. If you’re afraid of falling into the trap of depression, or if you think someone you know may be suffering from it, here are some telltale signs that can help you determine if you should ask for professional help.

There are many common symptoms of depression, however, it’s not the same for every person suffering from this mental health condition. Some of the more commonly experienced symptoms include having feelings of guilt or worthlessness and experiencing persistent sadness. However, one study indicated that in men, depression may manifest in different ways. The following are examples of the different ways men may show symptoms of early-stage depression.

These symptoms may show that the man is acting out to simply hide the fact that he is experiencing internal turmoil such as sadness or feelings of guilt. Eventually, however, the depression may worsen. Acting out to compensate for the depression will no longer be enough to hide the real symptoms.

The diagnostic criteria specifically indicate that the symptoms must have been manifested over a minimum duration of two weeks and that these have caused a change in the way the person functions. Moreover, at least one of the symptoms shown must either be loss of interest or depressed mood.

Note that these criteria are for the use of psychiatrists and mental health professionals and is based on the Diagnostic and Statistical Manual of Mental Disorders (DSM–5), Fifth edition. However, knowing how depression is diagnosed may also help those who are suffering from depression or the people around him or her.

These are examples of symptoms that a depressed person may show. There has to be a combination of at least five of these symptoms shown over a period of two weeks.

The symptoms included above normally cause impairment to the person’s functioning, whether it’s in terms of his work or social life, or just his daily routine. It is even possible that the depressed person may experience a total shutdown of normal functioning. The person may also be experiencing significant distress because of the symptoms.

#3 Not Caused By Medication

#4 Not Schizo Or Psychotic 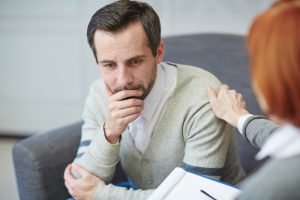 The psychiatrist may try to explain the depressive episode as a manifestation of a different disorder, such as a psychotic disorder or a schizo-related disorder. However, if it does not fit the criteria for the two disorders, the psychiatrist will then consider the possibility of depression.

The reason for trying to explain the depressive episode through the criteria for other mental disorders is to ensure that the right diagnosis is reached. There are actually symptoms that are common to both psychotic disorders and depression. Examples include anxiety, insomnia, and agitation.

#5 Not Manic Or Hypomanic

A manic episode, by itself, is not considered an actual disorder. However, it usually happens as part of a disorder other than depression, usually bipolar disorder. Hypomanic episodes are almost similar to a manic episode but are less severe and do not usually lead to impaired functioning or serious consequences.

A man suffering from depression may not talk about what he is going through or avoid professional help. His personal beliefs about how a man should be emotionally stable or independent or shame and fear about what other people may think of him may prevent a man from opening up about his mental condition. Moreover, admitting vulnerability is not always easy for a man.

There are many different ways to encourage a man to talk about his inner turmoil. Gentle and friendly approaches often encourage men to talk about how they are feeling. If you’re not sure how to help a man to open up about his depression, don’t hesitate to seek professional help.